Skip to end of banner Go to start of banner

How to assign or revoke roles 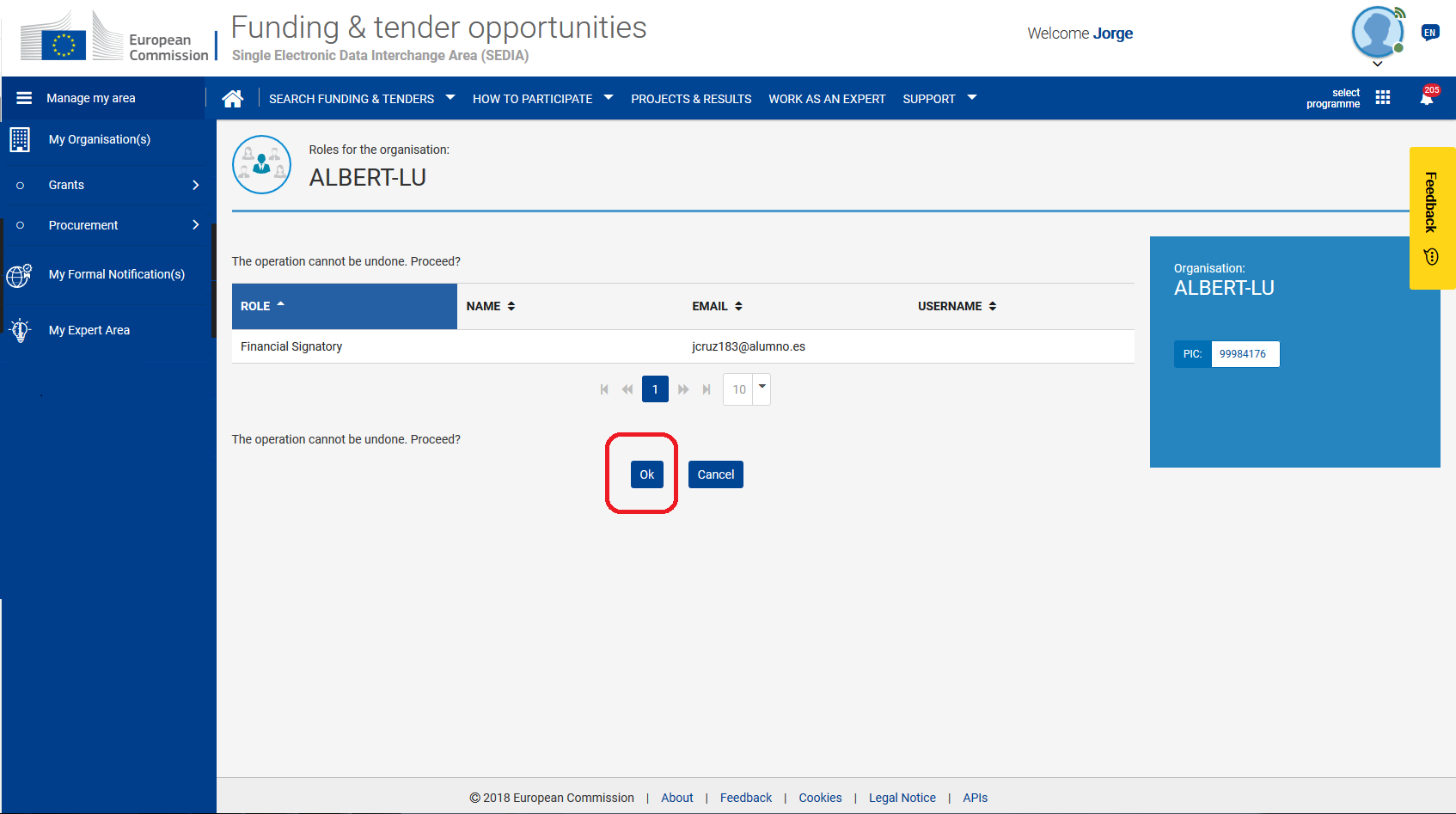 The Lear needs to set up a LSIGN/FSIGN to the organisation first. Once that this is done, you follow the same steps as when adding roles to a project, but when selecting this kind of role, the appointed LSIGNs/FSIGNs for the organisation will be listed for you, and you select one for the project by clicking on the radio button and confirming the selection via the OK Button.

Note that when LEAR added a comment for the LSIGN / FSIGN, it will display after the email address.

A prerequisite to assign a PLSIGN / PFSIGN is to allocate the LSIGN / FSIGN role in the organisation first. This action is to be done by a LEAR or Account Administrator of the organisation.

However, when assigning a PLSIGN / PFSIGN, LEARs and Account Administrators do not necessarily have the access to do it. This action is normally done by the Participant Contact (PaCo) of the organisation within the consortium.

Audit Roles can be only managed when your organisation has ongoing or past audits. If it is not the case, you will not able to assign the audit roles, you will not see them in the list of roles when adding a new role.

There are two types of roles for Audits:

These roles are not assigned to an audit team, because they are granted at organisation level, instead of at audit level.

For external audit firms only

If you are an external audit firm, see AUDIT Firm Roles

Assign an audit role and a team to a person

For Audited organisations, the LEAR will be assigned the first primary audit contact role. This role can manage the audit team, and may assign other audit roles for their organisation. If this is your first audit, a "Default" team has been created for you.

The Primary Audit Contact accesses their organisation roles under My organisations / Actions / View Roles, and clicks on the Teams tab.

Rename the team or add roles to an audit team by selecting Actions.

To display the current members of a team click on the arrow on the right.

To add new audit contacts to a team, the Primary Audit Contact can do either of the following actions:

Assign an audit to a team

Once the roles are assigned, the Primary Audit Contact needs to assign the audit to the team by going to My Audits. If the audits are currently assigned to a team, the name will be displayed in the corresponding column. An unassigned audit can be selected and assigned to a team from the drop-down list and clicking on Assign a team to the selected audits.  It is possible to select and assign several audits to one team at a time.

Additionally, Audit Contacts can nominate other Audit Contacts, but only for the teams they are members of, in either of the following ways: